Posted by eugenicsnewgenics on May 14, 2014 in Newgenics | Leave a comment 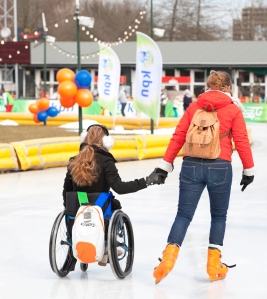 At 18, Chelsea became paraplegic as the result of a motor vehicle accident. Following her rehabilitation, she met a young man and they married quickly. Chelsea confided that she worried that no-one would want her, and she now questions whether her insecurities propelled her into a bad choice. Her husband insisted they live near his parents in a house that was not accessible, and Chelsea became quite isolated and lost her independence. When she was 20 years old and pregnant with their second child, Chelsea began to suspect that her husband was beating their daughter. She was able to crawl down the stairs and witness the abuse, which she immediately reported to police. However, her daughter was taken away from her, and Chelsea spent the next year and a half in the court system trying to show that she was not part of the abuse and that she was a capable parent. In his criminal case, the husband blamed his abuse on the pressure and stress of having a disabled wife, and Chelsea believes his sentence reflected some sympathy on the judge’s part regarding that claim. In the end, she regained full custody of her children, and at the time of her involvement in the project, she was attending university and living independently with her two school-aged children.

Chelsea’s story exposes many of the challenges disabled parents can face: lack of accessible housing, social isolation and lack of social support [1], the surveillance of authorities who are meant to help [2], and an attempt by her husband to use disability discrimination against her. However, in the face of all these different kinds of disability oppression, this woman has not only survived, but thrived as a parent of two young children.

Pauline had polio as a child, and she now uses sticks to help her walk. Married at the time of her pregnancy, her husband left before her son Mark’s birth, and she was left to raise him by herself. While pregnant, her post-polio syndrome became much worse, and she temporarily lost her ability to walk. She obtained funding and in-home supports in the form of personal care, but as is typical of much in-home support, there was no provision for the worker to provide any care to the child [3]. Ironically, Pauline’s support worker, despite the reality that the problem was compounded by poor policy, felt that Mark was being neglected. The worker reported Pauline to child services, arguing that she had was unfit to parent because of her disability. An investigation followed, but Pauline was able to show that she could care for her child, basically by living with him and caring for him at floor level on several mattresses, which she did for the first two years of his life. Pauline fired the worker, and then chose to forego any support for herself and Mark. Although she could have used the in-home support care for herself because of her mobility, she decided to refuse even that help because she feared that Mark could be taken away if she allowed authorities into her home. At the time of the interview for this research, Mark was 18 years old, Pauline’s health had mostly recovered, and the two seemed to enjoy a close and happy relationship.

The story of this woman’s success is one that occurred in spite of supports from the state. Many of the challenges Pauline faced arose from poor policy that treats disabled people as bodies rather than as people with lives and relationships, not from her own ‘failings’. In fact, her mothering, accomplished at a deep price, can be counted as almost heroic, despite the lack of services and supports she received.

In our research with disabled parents, it has been evident that certain kinds of disabilities are more likely to pose problems than others in terms of having and keeping one’s family intact. In particular, parents with intellectual disabilities seem to face challenges in keeping their families together. Likewise, they seem to face particular challenges in meeting people and developing satisfactory relationships. For more on this, please see People: Now.